skip to main | skip to sidebar

H.P. Lovecraft's "From Beyond", Adapted for comics by P. Craig Russell 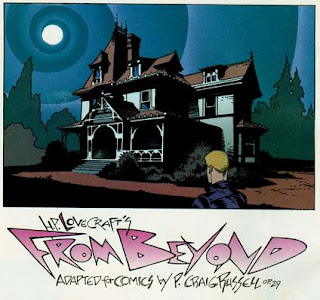 This is something new that I've also wanted to try for a while here on scummified. If you know me, you know that i love comic books. it's true. i LOVE comic books. it is a fantastic medium, much neglected and look down upon by people who think that these four color throwaway mags are strictly for kids and should never be read by anyone over the age of 10. I have been reading and collecting comics for as long as i can remember, and have a good sized collection with some books i never thought i would ever have (close to completing a run of EVERY Swamp Thing series, ever). Anyways, i digress. Comics are NOT just for kids, and to make a point, here is P. Craig Russell's adaptation of H.P. Lovecraft's "From Beyond" from a 1994 issue of that "premiere adult illustrated magazine" Heavy Metal, that is, well, downright beautiful stuff from a master comics illustrator. Russell has also adapted Wagner's "The Ring Of The Nibelung" and other musical works into comics form, the Robert E. Howard Conan story "The Jewels Of Gwalhur" (available in a very nice and inexpensive hardcover version), and is also a frequent collaborator/adapter of Neil Gaiman. He has a very fine style, and, well, its his fine line work and Lovecraft's story that makes this awesome.
This file is a .cbr file and you will need a Comic reader to view it with. I suggest Comical. It is a quick download, and very easy to use.
H.P. Lovecraft's "From Beyond" Adapted by P. Craig Russell
Posted by Doug at 12:57 PM 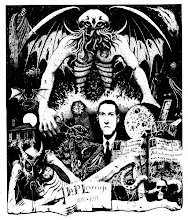